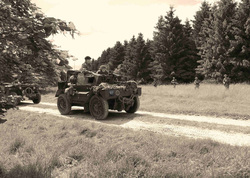 Daimler Dingo Scout Car
Arguably one of the finest armoured fighting vehicles built in Britain during the war, the Dingo was a small two-man armoured car. It was well protected for its size with 30mm of armour at the front. the 2.5 litre 55hp engine was located at the rear of the vehicle. One of the ingenious features of the Dingo was the transmission; a pre-selector gearbox and a fluid flywheel that gave five speeds in both directions.
The layout of the transmission components in the lower hull contributed to its low silhouette.
Although the Dingo featured a flat plate beneath the chassis to slide across uneven ground, it was extremely vulnerable to mines. No spare wheel was carried , but this was not really necessary because of the use of run-flat ( nearly solid ) tyres. Despite the hard tyres, the independent coil suspension gave it a very comfortable ride.
A swivelling seat next to the driver allowed the other crew member to attend to the No19 wireless set or the Bren Gun when required.
It had the ideal quite engine and low silhouette. 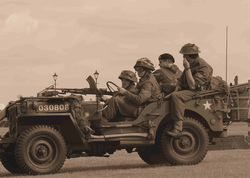 Willys MB Jeep
For these respective pre-production runs, each vehicle received revisions and a new name. Bantam's became the ﻿BRC 40﻿. Production began on March 31, 1941, with a total of 2,605 built up to December 6. The company could not meet the Army's demand for 75 Jeeps a day, production contracts were also awarded to Willys and to Ford.

After reducing the vehicle's weight by 240 pounds, Willys' changed the designation to "MA" for "Military" model "A". The Fords went into production as "GP", with "G" for a "Government" type contract and "P" commonly used by Ford to designate any passenger car with a ﻿wheelbase﻿ of 80 in (2,032 mm).
By July 1941, the War Department desired to standardize and decided to select a single manufacturer to supply them with the next order for another 16,000 vehicles. Willys won the contract mostly due to its more powerful engine (the ﻿﻿﻿"GoDevil"﻿)﻿ ﻿which soldiers raved about, and its lower cost and silhouette. The designfeatures the Bantam and Ford entries had which were an improvement over Willys' were then incorporated into the Willys car, moving it from an "A" designation to "B", thus the "MB" nomenclature. Most notable was a flat wide hood, adapted from Ford GP. 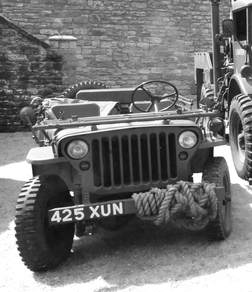 Willys  Jeep
Third Jeep within the group, the Jeeps are one of the most popular historic military
​   vehicles to own, simply because the are easy to store and easy to transport. 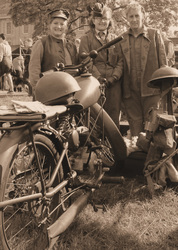 German DKW RT98 Motorcycle, which was selling very well in Holland before World War II. The Rotterdam importer was Jewish owned,   however, so in 1938 the Nazis pulled the concession and gave it to someone else.
The Dutch and Belgian Armed forces used the RT98 as message motorcycles and so did the German Army although they were not an
official issue.

The original Dutch importers turned to Royal Enfield for a copy of the RT98 to sell. The engine size was increased to 125cc. The
English  model was called the "RB" (for Royal Baby) to exploit the connection to the DKW RT. Prototypes were displayed in Rotterdam
in 1939, but few reached the public before war broke out in September.

In Britain, the Model RE, as it was officially known, was enlisted for military service. In particular, its light weight meant it could be
​  dropped by parachute in a tubular crate Royal Enfield also produced. The nickname Flying Flea was a natural.
​
The photo shows a captured DRK with our ATS section.
61st Reconnaissance 61st reconnaissance Recce 50thdivision Reconnaissance Corps ww2 living history ww2 Re-enactment 61streconnaissance,61st,reconnaissance,recce,50thdivision,reconnaissance corps,