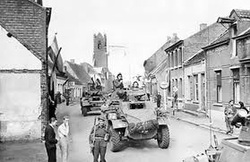 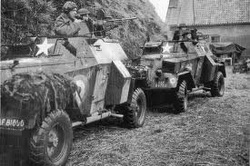 It became part of the Royal Armoured Corps in 1944, still maintaining its own cap badge with two lightning strikes supporting an upright spear. With the end of the war, this number of reconnaissance units was not needed and the Corps was disbanded in August 1946. Reconnaissance duties reverted to Regular armoured units of the Royal Armoured Corps.The Reconnaissance Corps was charged with gathering vital tactical information in battle for infantry divisions, probing ahead and screening the flanks of main advances. The Training Centre was established at Winchester in February 1941, until the home of the Corps moved to Catterick in Yorkshire. Although the Corps was raised from various regular army units, it did not follow that all men would be retained, as potential reconnoiterers were required to take an IQ test and other tests before being accepted. Many failed and were sent to normal infantry battalions, but those who succeeded enjoyed the kudos of belonging to an elite unit and were determined to prove their own worth. Before beginning training with his unit, each man undertook a five week course with technical units, which determined his role as a driver, wireless operator or mechanic. Most recce men became efficient in two of these roles e.g. Driver/Operator. During training with a reconnaissance unit, emphasis was placed on both aggressiveness and initiative, as these were the characteristics expected of the men selected for such units, and, as a result, a proud offensive spirit was created, similar to other newly founded units such as The Parachute Regiment. Reconnaissance Regiments were organised into a headquarters squadron (including anti-tank, signals and mortar troops) and three reconnaissance (or "recce") squadrons. Each recce squadron comprised three scout troops and an assault troop. Scout troops were equipped with Light Reconnaissance Cars (LRCs) such as the Humber Light Reconnaissance Car and with Bren Gun Carriers. The assault troop comprised lorried infantry and were called up when enemy resistance needed to be overcome. Later in the war more efficient and well-armed armoured cars such as the Humber Armoured Car, Daimler Armoured Car, Staghound and Greyhound augmented the LRCs in scout troops.