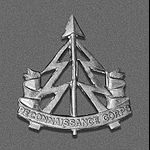 The corps had two official motto's:-
Ab Uno Disce Omnes - "From One Learn All", and
Via Trita, Via Tuta, - "Beaten Paths Are Safest"

We prefer the unofficial motto:-
Only the Enemy in Front.....Every Other Begger Behind.

61st Reconnaiassance Regiment
Formed September 1941, from the 182nd, 183rd and 184th Brigade Anti-Tank Companies.
Formed as the Reconnaissance Regiment for the 61st Infantry Division, then transferred to the 50th Division to replace it's regiment lost in North Africa.
The first regiment in the corps to get ashore in the invasion of Normandy. The task for the Invasion was twofold: First to provide contact patrols with the assaulting battalions, working back to a control set at Divisional Headquarters; and second, to land a skeleton reconnaissance regiment.
The first vehicle ashore on D Day were the contact patrols light Recce Cars and jeeps, these were very vulnerable and over half the crews were killed or wounded either on the beach or before reaching them.
Nevertheless they justified themselves by getting information back to Divisional Headquarters before it arrived by normal channels. The ones that had lost their vehicles did great work fighting along side the Infantry.  Only half of the 61st recce units that intented to land in the first wave got ashore the rest had to remain on the LST's eventually getting ashore on D Day + 2.The the Recce role then began as they pushed forward, but the resistance stiffened and soon reconnaissance gave way to holding the line in an area around Briquessard a standard infantry role with some very hard fighting.
Once the breakout was achieved the reconnaissance really came into its own sometimes surging up to 65miles in front of the main force. Next the regiment was invovled in the push to Arnhem (A Bridge too Far) eventually reaching Nijmegan bridge and up to the south bank of the Rhine. After Arnhem the war settled down for the winter and again the regiment went into a line holding role in a flooded area known as the Island.
Then the axe fell on the 50th division who were returned to the UK as a training division the 61st recce found a few jobs helping others out then they were odered back to Iseghem to disband.
All the fighting vehicles fuel and ammunition was handed in to various dumps and the men were give a few days leave, but then in  December an order came to remobilise to counter the Rundstedts Offensive in the Ardennes (Battle of the Bulge). They managed this in just over a day and joined the armoured brigade ot the 11th Armoured Division, which helped check the Axis advance in the Ardennes and then started to push it back.
Then the axe fell again with the order to disband, most officers and men joining other recce units.
During the campaign the regiment earned, One DSO, Eight MCs one DCM, Five MMs Three Croix De Guerre and Three M.B.E,s.
61st recce Casualties amounted to 50% in the first 24hrs of D Day, total losses incurred up to January 1945 amounted to almost 76% of their original numbers either killed, wounded or missing.


The official war records of the 61st Reconnaissance Regiment were lost so all the information is from veterans accounts a great source of information is a book by Roy Howard ( A Sqdn.) Called Beaten Paths are Safest. 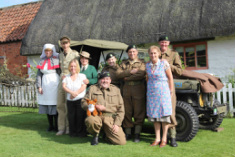 Mascot
The 61st Recce mascot is a Fox after troop officer Captain Crompton Bishop found an abandoned Fox cub while on manoeuvres in England, he hand reared it and even took it to Normandy with him where he could be seen taking it for a walk on a lead in the evenings.
Captain Bishop survived the war but we don't know what happened to his fox.
61st Reconnaissance 61st reconnaissance Recce 50thdivision Reconnaissance Corps ww2 living history ww2 Re-enactment 61streconnaissance,61st,reconnaissance,recce,50thdivision,reconnaissance corps,